Sometimes the concept of emergence has been used to justify a belief in such splits. At least some of the nineteenth century British emergentists, for example, used it to defend the idea that there was a separate realm of consciousness – that mental properties could never be explained in terms of physical properties. Similarly, life was thought to be unexplainable in terms of non-living matter, and a realm of the spirit might be split off from the mundane material world in the same way. Life, mind and spirit, then, were to be insulated from science’s march to explain everything by seeing them as special properties that would always remain a mystery.

Along with many other contemporary emergentists, I use the concept of emergence in a different way: for me there are no mysteries that must necessarily remain beyond the reach of science, though there are plenty we haven’t solved yet. Instead, when I talk of the social emerging from the material I mean that there are social entities – organisations, for example – that have properties that their material parts don’t have, but that we can explain those properties as a consequence of the ways in which their material parts interact. Explaining those properties, however, does not explain them away. The causal power of an organisation can be explained by showing how interaction between its members generates that power, but it remains a power of the organisation and not a power of the members if it can only exist when people are structured into an entity like this organisation. 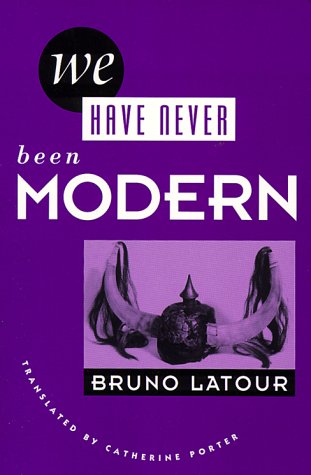 Though I’ve never done the research to prove (or disprove) it, it seems to me that the old dualisms were ultimately an attempt to preserve a religious or at least a quasi-religious world view against the march of science. So I find it odd when Bruno Latour, most famously in his book We Have Never Been Modern, lays the responsibility for dualist thought at the door of the Enlightenment. What’s even odder is that he writes as if everyone before him has been guilty of dualising nature and culture, or the material and the social. The entire history of the humanities and the social sciences is dropped into the dualist box, when in fact countless philosophers, historians and social scientists have examined a whole range of interactions between social and material forces. For example both Marx, who argued that changes in material technology influenced social development, and Durkheim, who argued that bringing large numbers of people together physically in cities generated new social forms, explained modernity itself in terms of material influences on the social.

Still, Latour is right that both philosophers and social scientists have often talked of the social as if it could be analysed in abstraction from the non-human material world. Debates about social structure, for example, are predominantly disputes about whether it is only human beings that have social power, or some other structure whose significant properties still depend purely on humans. When non-human material objects enter into the picture it is often in a subsidiary role. When John Searle discusses money for example, objects such as coins appear only as tokens, as indicators of a meaning ascribed to them by humans and their linguistic practices, not as things with causal significance of their own. (Searle does at least bring material objects into the picture, which arguably puts him ahead of most.) Similarly, the interest taken in humans themselves is largely in their role as thinkers and communicators, and rarely in their own material forms and their implications.

Worse still, some of the more extreme traditions of social constructionism have treated the material world as if it was more or less irrelevant to what occurs in the social world. In these traditions, materiality is just another category that we could think differently, and stuff like rocks and tables are not things with causal significance but merely labels we employ conventionally in rhetorical strategies. In these traditions, the only thing that makes a difference in the social world is what human beings think and say. (I argued in my book The Reality of Social Construction for a more moderate social constructionism that recognises the independence, on the whole, of the material world from what we think about it).

There are, then, multiple traditions of thought in the humanities and social sciences that are thoroughly anthropocentric and arguably dualist as well, seeing the material world as more or less irrelevant to what happens in the social world – whether they neglect it unconsciously like most social ontologists or as a matter of principle like the radical social constructionists.

Latour’s contributions to actor-network theory have played a central, though by no means the only, role in challenging this anthropocentrism. Latour’s alternative is to treat human actors and non-human objects in precisely the same way: both contribute to the production of events, and both contribute only as elements in constantly shifting unique temporary assemblages of influences. I want to suggest that there is something right in Latour’s response, and something wrong. What is right is that he restores attention to the non-human material objects that contribute to the causation of events that we call social, and to the multiple determination of such events by a broad range of interacting factors (see my 2008 paper on ANT). What is wrong is that he effaces the uniqueness of human causal powers, the distinctiveness and the causal contributions of social structures, and indeed the existence of types of objects with consistent causal powers that arise from their characteristic structures (see my 2015 paper).

My second reason for calling this blog ‘Materially Social’, then, is that I plan (among other things) to use it to explore how we can reinstate the material in explanations of the social while retaining a realist understanding of causal types and powers. In a later post I’ll introduce one way of doing that which I think is both interesting and innovative: the idea that entities with social powers often have non-human material objects as well as human beings as their parts. If that is so, then social structure itself may be material in more ways than my first post suggested.