Why ‘Materially Social’? Part One

I’ve called this blog ‘Materially Social’ because the phrase links together the original motivations for my research programme with some recent developments in it. Today I’m going to focus on the original motivations and where they’ve led me – I’ll post about the recent developments later.
I’ve always been interested in how the social world works, partly I suppose because it is unavoidably important to me and indeed everyone else at a deeply personal level: it’s the sea we swim in and nothing else in our world makes sense without it. But partly also because it’s always been a mystery and getting to the bottom of that mystery (or even just a layer or two down) is one of the most fascinating intellectual challenges there is. It seems pretty clear that there are social forces that have an impact on our lives – such as customs that shape what we’re allowed or expected to do, authority structures with the power to discipline and direct us, and economic forces that constrain or open up opportunities and resources for us. But for anyone with a vaguely scientific desire to understand the world it’s much less clear how those social forces work.

My work starts from the belief that we are material beings who live in a thoroughly material world and that the social did not exist before people brought it into being, whether or not they knew what they were doing when they did so. Therefore social forces must ultimately depend on material stuff, and in particular (but not only) on people. I’ve learned that there are ways of thinking about people that ignore their materiality, as if we could explain their actions and therefore also the social world just in terms of disembodied reasoning minds or communicating subjects. But it seems clear to me that our capacities to reason and communicate, and indeed all our capabilities, themselves depend on the thoroughly material forms and properties of our bodies (although we still don’t know exactly how that dependence works). 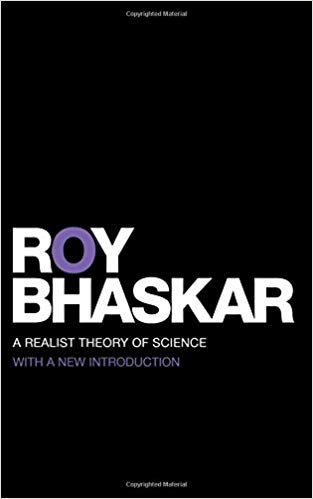 How, though, do we get from material people to social forces? I spent most of my time as a PhD student thinking about that. At first I gradually pieced together an answer myself, influenced by the understanding of nested systems I’d acquired from many years as a computer programmer and technology strategy manager. The answer filled out nicely when I discovered the work of other authors who had already been struggling with the question, in particular the critical realist philosopher Roy Bhaskar’s book A Realist Theory of Science. Bhaskar was by no means the only writer I drew on, and I’m fairly selective about what I take from his work, but there is still a very Bhaskarian argument at the heart of my approach to these issues.

Bhaskar argues that all events are produced by the interaction of causal powers, that causal powers are possessed by things, and that they arise from the nature of those things. They are emergent properties of the things that possess them, meaning that the parts of the things concerned don’t have those same powers – the powers only come into existence when those parts get organised into this kind of thing.

There are various ambiguities in Bhaskar’s presentation of the argument, which have been debated at some length in the literature, but I think I’m arguing in the same spirit as he does when I say that the powers of things (I usually say entities rather than things) are produced by processes of interaction between the parts of those things, processes that depend on the way those parts are organised when they are formed into a thing of this kind. I call those processes generative mechanisms – mechanisms that generate the power of the thing concerned (until recently I thought I was being faithful to Bhaskar here, but a helpful reviewer recently pointed out that in RTS Bhaskar uses the term a little differently).

That argument seems to work quite nicely for ordinary material things – the power of an old-fashioned clock to turn its hands at a certain steady rate, for example, is an emergent property of the clock. The generative mechanism is a process of interaction between a set of cogs, springs, and other parts, and it’s clear that this is an emergent property (at least in the sense of emergent that I’m using here) because the cogs, springs, etc would not have it if they weren’t organised collectively into a clock. 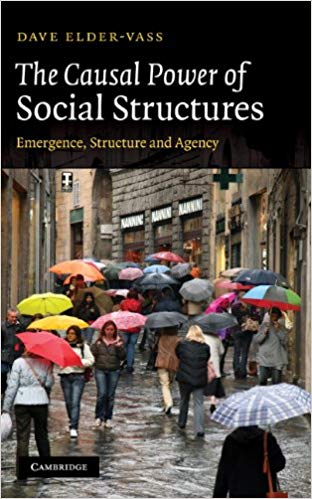 But can the same argument be applied to social forces? I devoted my book The Causal Power of Social Structures to arguing that it can. Consider an organisation, for example: organisations are composed of people (though perhaps of other things too – I’ll come back to that in a later post). Those people are related to each other in this context in ways that are defined by their roles in the organisation. As long as they perform their roles they are acting as parts of the organisation, and when the members do perform their roles the resulting organisation is a social entity with capacities to influence the world that its members would not have if they weren’t collectively formed into that entity. A barbershop quartet, to pick a relatively simple example, has a power to produce harmonious music – a power the individual singers would not have if they weren’t organised into this group. I discuss much more complex and interesting examples in the book, but that one will do to make the basic point.

To give a more useful account of social events, we need to theorise many different forms of social entity and their powers, and consider how they interact – not only with each other but also with non-social forces – to produce individual events. There’s a huge amount of complexity in such explanations, but that’s also true of explanations of non-social events. In both cases a wide range of powers interact to produce events, and in both cases we explain those events by identifying the powers involved and the mechanisms that produce those powers.

If all that I’ve said above is sound, then we have a way of rooting the social in the material: social events are produced by interactions between the causal powers of social and other entities, and all of these entities get their powers from interactions among their material parts. Here, then, we have a materially social world.